Farmers and researchers come together to grow grassland agriculture 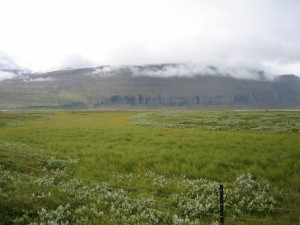 We estimate soil carbon sequestration in two ways, direct measurement of soil C stocks through time and calculating inputs and outputs of C to the system, i.e. net ecosystem production (NEP). In one project, we have demonstrated a loss of about 200 g C m2/y over a 3-y period using the direct measurement method. The most alarming part of this finding is that grasslands are generally considered carbon sinks, but none of the 5 grassland communities we established were accumulating carbon during this period, irrespective of disturbance and nutrient management. In experiments where we are estimating NEP by measuring NPP and soil respiration, both Wisconsin pasture and California annual grassland were losing carbon at equivalent rates during the same 3-y period. 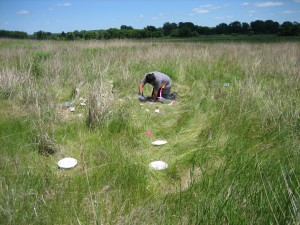 UW-Madison and Michigan St. University were recently awarded a grant from the Department of Energy to establish the Great Lakes Bioenergy Research Center. The focus of the GLBRC is to overcome the processing bottleneck when converting cellulose to ethanol. However, a significant thrust of this project is ‘sustainability’, which to us means understanding tradeoffs in the ability of biofuel cropping systems to perform ecosystem services, including not only provisioning services like biomass production, but also supporting services like C sequestration and nutrient retention, regulating services such as water purification and climate stabilization, and the cultural services of wildlife habitat, aesthetic enjoyment, and biodiversity. We are currently collaborating with Dr. Phil Robertson and others from MSU’s Kellogg Biological Station LTER to measure these changes in various cropping systems of variable species diversity.

With Dr. Mark Renz I’m working on a project that complements our GLBRC research by assessing the sustainability of switchgrass (Panicum virgatum) production on six farms in Southwestern Wisconsin. The use of switchgrass and other native warm-season grasses is of great interest in Wisconsin. However, we lack information about proper management practices for the establishment and growth of switchgrass. This project seeks to fill that gap in addition to assessing how such management practices affect key ecosystem services such as carbon sequestration, soil stability, and nutrient loss. In another effort directed toward this end, I recently served as lead PI on a proposal submitted to USDA-DOE to examine how the landscape context, including diversity and configuration of cropping systems in watersheds, influences these ecosystem services. 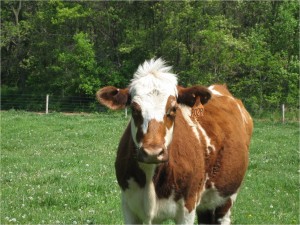 Livestock grazing of pastures is a growing phenomenon among beef and dairy producers of the upper Midwest. Management intensive rotational grazing (MIRG) is especially popular because of its low capital requirements, benefits to forage production, and perceived lifestyle benefits. However, the ecological benefits of MIRG thus far are mostly anecdotal. We are testing the effects of MIRG on ecosystem processes compared to alternative management including continuous extensive grazing, harvesting, and CRP. Specifically, we are examining the effects of these management regimes on cool-season pasture 1) microbial biomass, composition and functional diversity, 2) net ecosystem production—soil carbon accumulation/loss, and 3) forage quality and quantity.

With Dr. Geoff Brink, we are examining the effects of renovation and management on pasture productivity and quality under rotational grazing. This work is being conducted on farms across a range of latitudes in Wisconsin.

Growing interest in prairie restoration provides us with a unique opportunity to blend conservation efforts with agricultural production by integrating tallgrass prairie species into grazing systems. Potential benefits of this approach have agronomic (improved forage quantity and seasonal distribution), ecological (increased genetic diversity and ecosystem function), and social (niche markets, promotion of farmers as land stewards) dimensions. In past projects, we have 1) tested management techniques to promote the establishment of native, warm-season (C4) prairie grasses sown into cool-season (C3) grass pastures 2) evaluated the persistence of native C4 grasses under summer bison grazing, 3) administered a written survey of 800 Wisconsin farmers to understand the current status of native grass use and farmer attitudes towards native grasses and 4) developed a research brief for farmers discussing the use of native grasses.

Currently, we are evaluating forage quantity and quality and pasture carbon sequestration potential under a gradient of cool-season to warm-season grass ratios. This work will provide information on the proportion of C4 grasses needed in working lands to achieve agronomic and ecological benefits. In addition, we are researching the establishment, management, and persistence of native warm-season grass pastures in Wisconsin. This study compares the suitability of named varieties versus local ecotypes of native warm-season grasses and evaluates their persistence under several grazing regimes.

Iceland’s latitude (66 N) situates it as a sensitive indicator of the effects of climate change. Working with Dr. Claudio Gratton, a food-web ecologist, and others, we hypothesize that grass farmers around Iceland’s many lakes depend on nutrient and carbon inputs to their hayfields from small insects, mainly midges, emerging from the benthos. We are exploring the link between midge abundance and grassland NPP while simultaneously modeling predicted climate change effects on midge abundance. These relationships should help us generalize a model of how climate change will affect grassland agroecosystems, which support millions of people globally.

Reed canarygrass (Phalaris arundinacea) is actively promoted by university researchers and extension personnel as a forage species in the upper Midwest. Simultaneously, this native plant is listed as the number one invasive species in the state of Wisconsin because it forms monocultures in wetlands and waterways thereby decreasing biodiversity. Past research explored a low cost restoration approach—burning followed by spraying of a grass-specific herbicide. Results were highly variable, but we learned that under some conditions, this combination can effectively suppress reed canarygrass in wetlands.

We are currently working with Dr. Michael Casler to address the question of how reed canary grass, which is native to North America, has become one of the most dominant invasive species throughout the United States. Improved varieties and wild populations from throughout the North American and Eurasian range of the species are being grown under identical environmental conditions to determine whether the invasion has been caused by changes in the aggressiveness of the species (i.e., the native North American populations are less aggressive than improved varieties or Eurasian populations).

We are working with Dr. Michael Casler on another C3 forage grass, meadow fescue (Festuca pratensis). This project seeks to provide genetic and ecological information about meadow fescue, a grass with large agronomic potential—high productivity, palatability, and persistence. Toward that end, we are documenting the degree of genetic diversity found throughout the Driftless Region in Wisconsin, Minnesota, and Iowa, and studying the degree of interrelation and gene flow between locations in this region. Concurrently, we are documenting the ecological environments in which meadow fescue is found and attempts to quantify its role in the plant community. With this information we can help direct future breeding and propagation efforts, as well as evaluate risk of potential “ecological disservices” such as unwanted expansion into ecologically sensitive locations or local elimination of certain species. We hypothesize that these traits, combined with eutrophied wild lands, may render meadow fescue a potentially invasive plant, though there are currently no indications that it is spreading beyond managed pastures.

+Advancing the science of agroecology

Complex problems and research questions call for interdisciplinary research. An example of institutional awakening to this need is the advent of agroecology curriculum, programs, and centers. Attending this interest is a great deal of confusion about what agroecology is, who practices it, and how it should be defined. In an effort to advance this science, my research group has applied various experimental agroecological models to questions of grassland ecology:

Each approach presents its own unique challenges and opportunities. The results from the first model have been streamlined and quickly turned into several manuscripts submitted for peer-review. The second approach has produced a publication, but synthesis is slow. A preliminary comparison of these approaches was addressed at the 2007 Ecological Society of America conference, and our lab continues to examine the tradeoffs inherent to these alternative models of agroecological research.

Demand that policymakers address social and environmental problems with transformative, NOT incremental, change.

Develop programs that incentivize transformative, NOT incremental, change. We must have policies that improve food security especially for those with troubles feeding their families and ways for farmers to sell their products to consumers that provide them.

Search and develop new markets and profit strategies that reward all supply-chain participants for positive social and environmental outcomes.

Develop and market products that do not degrade the environment and help restore productive grasslands that retain nutrients and build soil health.

Look for opportunities to convert row crops to perennial pastures in various livestock classes (e.g., grazing heifers) and parts of the landscape (e.g., stream buffers). Push processors and suppliers to promote these practices as part of product marketing.

Listen and respond to communities to develop models of what’s possible in landscapes, supply chains, farm enterprises, and governance.

Join the conversation! Share your ideas and passion about how we build-out Grassland 2.0!

We are working to bring people together

The Grassland 2.0 project is a result of decades of research showing that our best, and perhaps only, opportunity to build soils, nutrients, and carbon in agricultural production while providing farmers and society with profitable and productive outcomes is with grazed perennial grasslands.

We are working to inspire people to come together to identify how we can achieve these outcomes, create spaces for a process of Collaborative Landscape Design, and grow the Grassland 2.0 movement by engaging with coalitions working toward an agriculture that works for all of us!